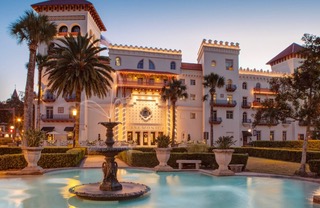 Saturday, April 2, 2022, Nord Est Floride will have dinner at The Casa Monica Resort & Spa in St. Augustine. Champagne served on the veranda above the pool will be followed by dinner in the historic hotel. The hotel, built by Franklin Smith, a noted Civil War-Era abolitionist, in 1888 in the Morrish Revival style, was later taken over by Henry Flagler who had two neighboring hotels. It sits in the center of this beautiful “ancient city.” Chaîne members interested in attending should contact Ned Skinner, Bailli, at nedlskinner@icloud.com