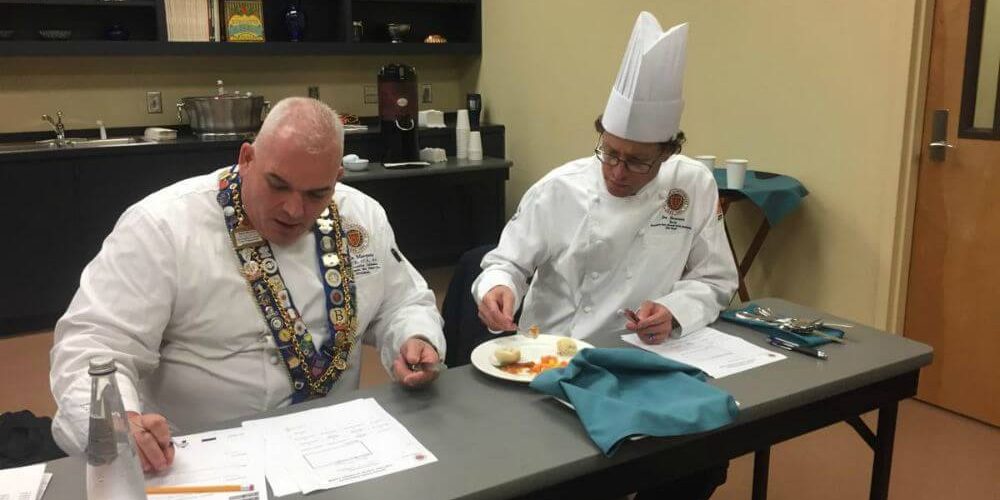 Military division of the Chaîne des Rôtisseurs’ national culinary competition was held at the Culinary Institute of Charleston.

The five competitors in the military division of the Chaîne des Rôtisseurs’ national culinary competition, held Friday morning at the Culinary Institute of Charleston, probably wished they knew in advance which ingredients they’d be asked to prepare. The contest’s lead coordinator certainly would have preferred if they did.

“I don’t like it,” says Reimund Pitz, conseiller culinaire for the U.S. branch of the gastronomic society, says of the standard ‘mystery box’ format. “It puts added and unnecessary pressure on the chefs.”

He’s referring to the group’s tradition of wearing chained medallions when they dine out together, the most visible symbol of the international society’s devotion to French gastronomy. Founded in 1950 by gourmands who took their name from the 13th-century tradesmen who cooked the king’s goose, Chaine des Rotisseurs now has about 7000 members in the U.S.

But in the 1980s, when Pitz was active on the competition circuit, chefs were typically asked to provide judges with three menus; judges would then choose one for the chef to make. He suspects cooking contests will eventually be conducted that way again, especially since the notion of blindsiding chefs with an unexpected fruit or cut of meat is unique to this country. Eventually is the operative word, he adds.

“Change is very slow in this organization,” he says, pointing out that the Chaine traces its history back to the thirteenth century. It recently established a chapter in Charleston.

Yet the group has made changes since 2015. Most notably, Pitz lobbied for the creation of a Culinary Weekend now taking place in Charleston, rounding out a longstanding competition for young chefs with a members’ gala, members’ seminars and contests for pastry chefs and military chefs, the latter of which debuted this year.

“It used to be behind closed doors, ‘here’s your medal’,” says Pitz. “I said, ‘what about the members?’”

Although judging is still left to professionals, members will get to meet the military chefs – most of whom cook on a daily basis for high-ranking officers – at Saturday night’s gala. Pitz appointed the competitors to a temporary Chaine honor guard, which means they’ll carry an American flag into the Francis Marion Hotel ballroom. Approximately 100 members from across the country are supposed to attend the party.

“It’s going to be incredible,” he says.